Value and Contrast with Darker Skin Tones – the Celebrity Version 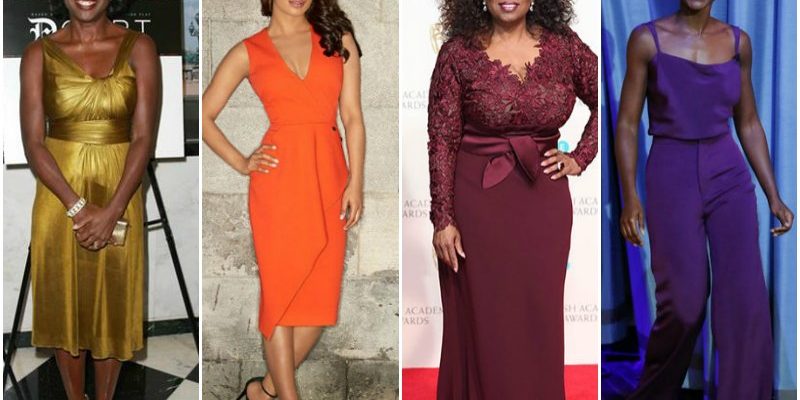 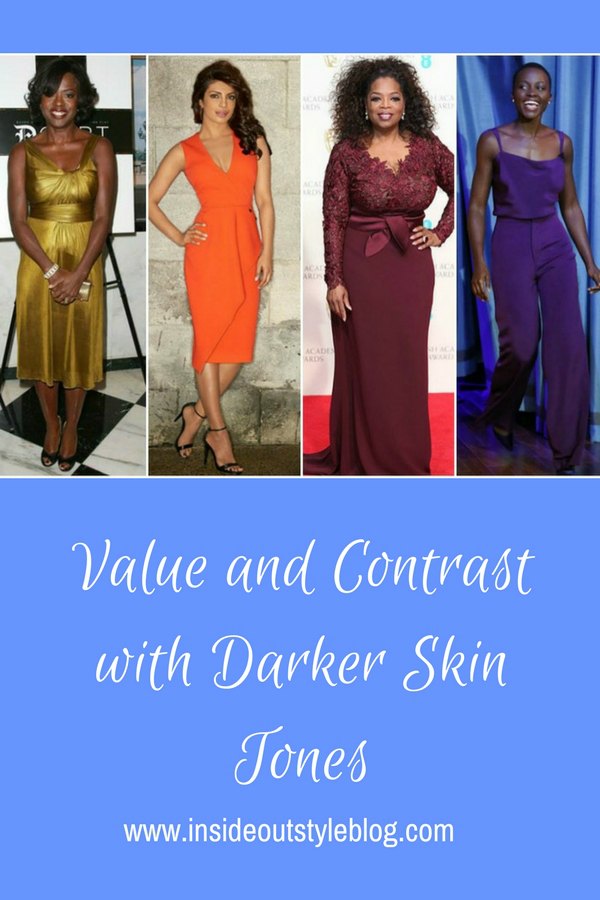 When you think about the value of someone with a darker skin tone, usually they have also darker hair which makes their overall value down the deeper darker end of the value scale.  But what is their value contrast and colour contrast?

Frequently their colour contrast is monochromatic  – one colour – dark brown eyes, skin and hair.  But sometimes they may have a more coloured skin, which throws more yellow or orange tones which means they actually look best wearing a colour, rather than just neutrals.

Just wearing neutrals can look boring, and in fact with many darker skins a one colour outfit works really well, enough colour to add life, not too much that it overwhelms.

Let’s look at some examples. 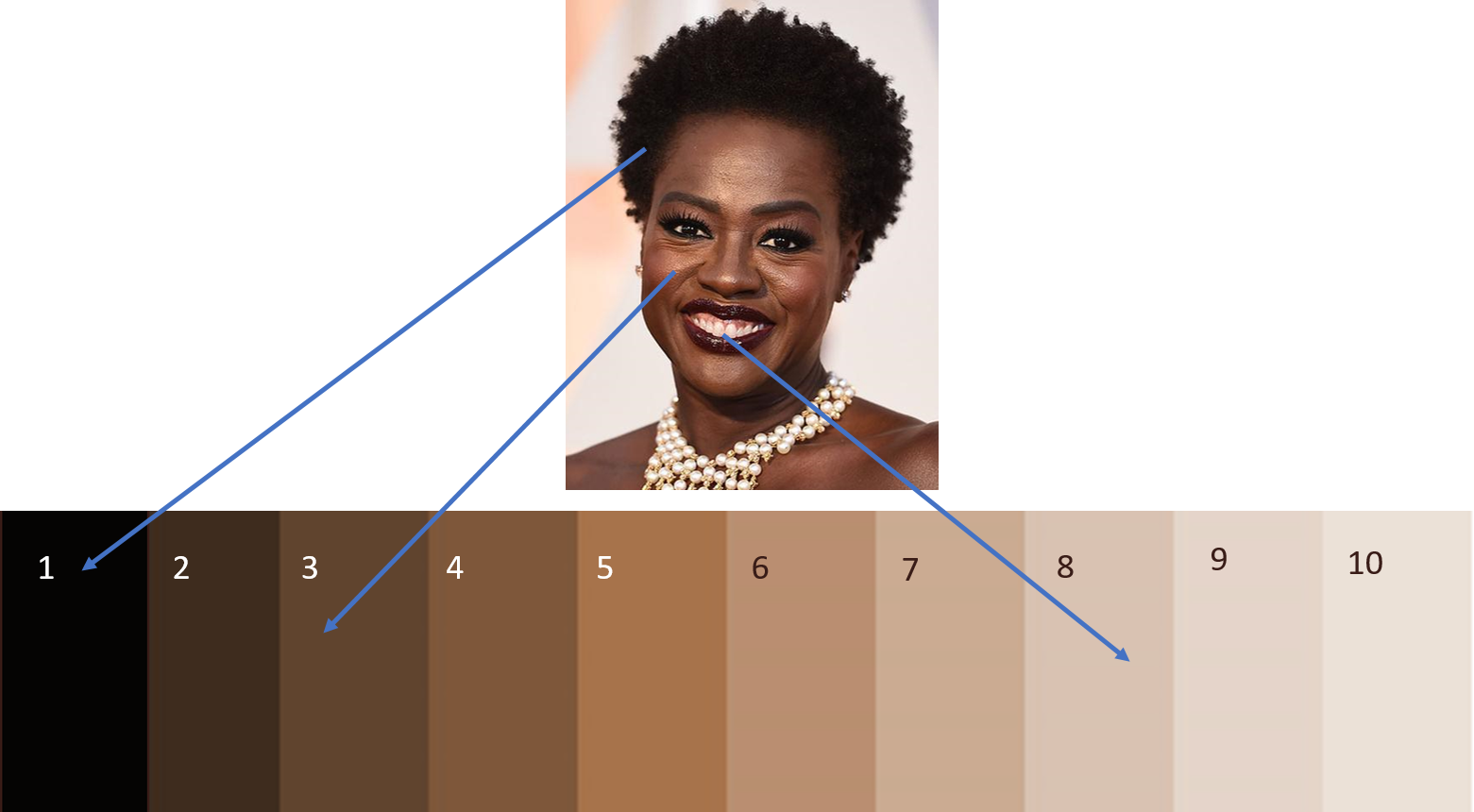 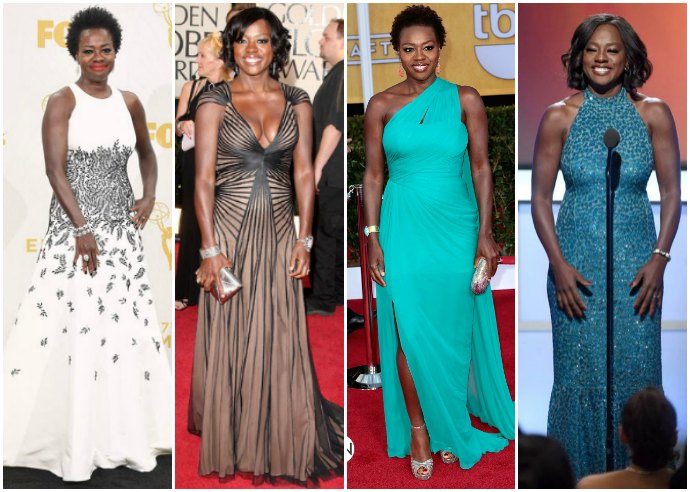 Notice how Viola has lovely big white teeth.  These are quite a prominent feature (and like dark eyes on a fair person) give her a medium-high value contrast but it’s stepped through from dark to light.

What I’ve illustrated here, as her overall value is deep, when she wears a predominantly light dress (left) even though it has elements of dark, it’s just not enough and the dress feels to extreme in contrast with her.

But when she wears a darker light – one that works well with her skin (2nd left) along with dark elements, and more of those dark elements are near her face, that level of medium-high contrast works really well.

Now, as Viola is best in a monochromatic or neutral plus 1 colour at a time kind of colour contrast, she still needs to take into consideration that the colour she chooses is one that matches her undertone.  The cool green dress (2nd from the right) is unrelated, so the dress is the total focus.  Versus the darker teal which is warmer and also a deeper value, works really well with her colouring.

Do you see how when the colour and contrast works, Viola becomes the focus, the dress is lovely, but she’s what you see first?  When the colour is too light in value or too high in contrast, Viola disappears and you see the dress first. 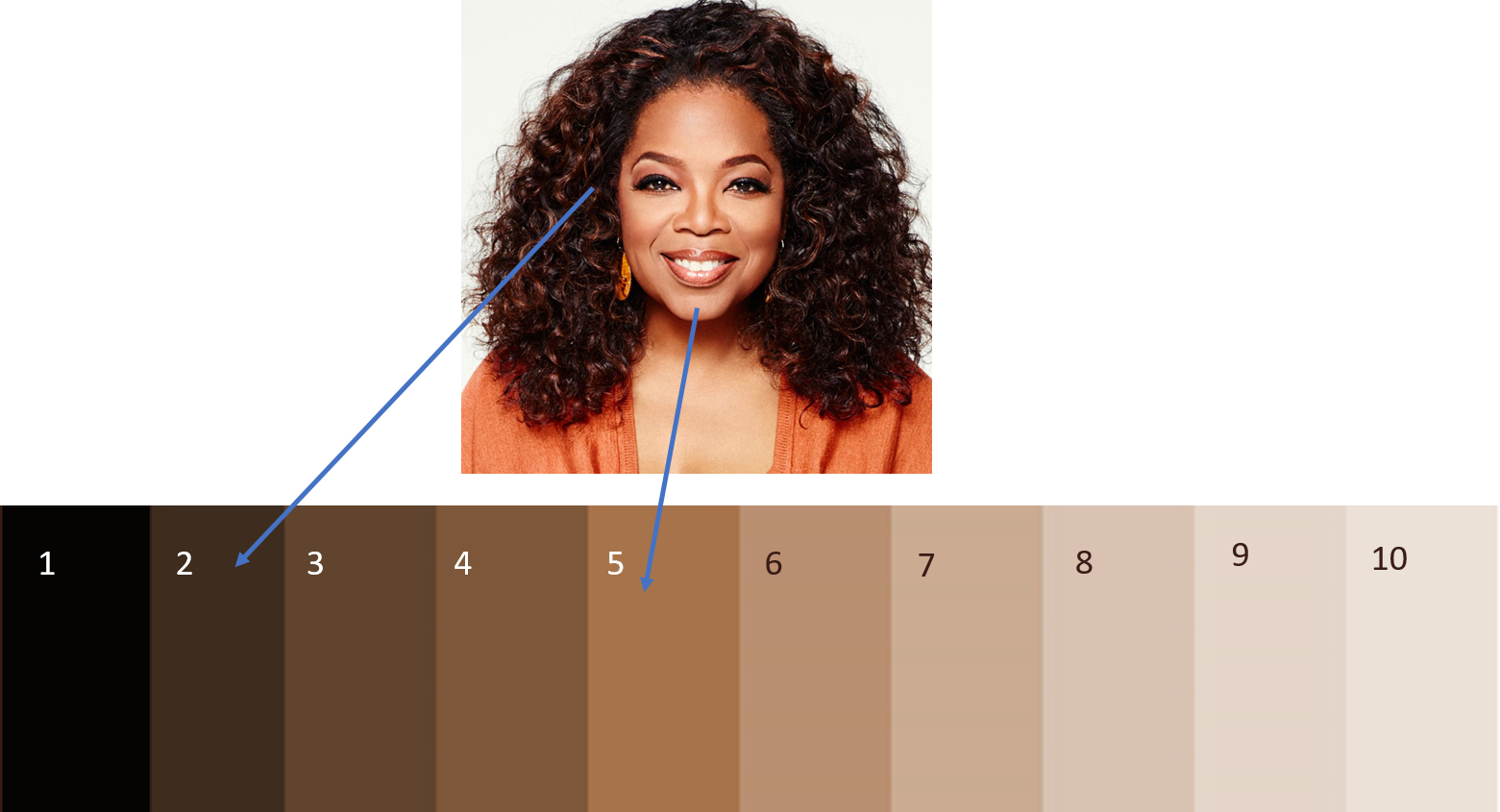 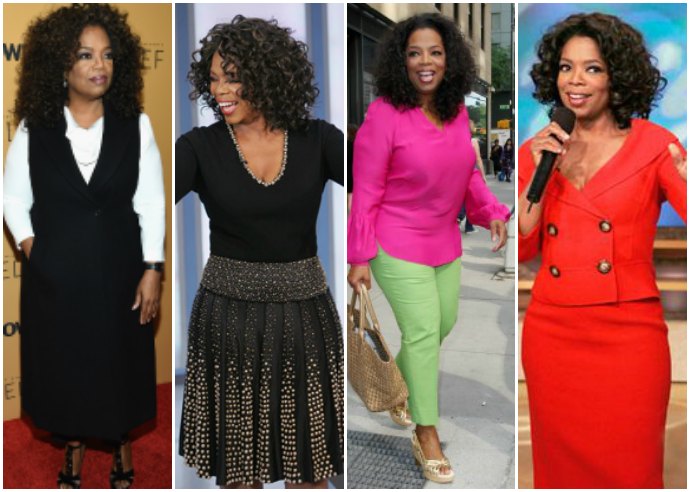 You see with Oprah, when the contrast is too high like the black and white outfit on the left, where there is too high a proportion of the light element of the outfit it wears her.  Now in the 2nd outfit from the left, it’s mostly dark with just small elements of a medium light colour which works so much better with her value contrast.

Now Oprah does have an orangish skin on the whole and she wears one colour well, but when she pairs two colours that are complementary (pink and green, 2nd from right) the outfit really overwhelms her.  Just one colour like the red outfit works really well (right). 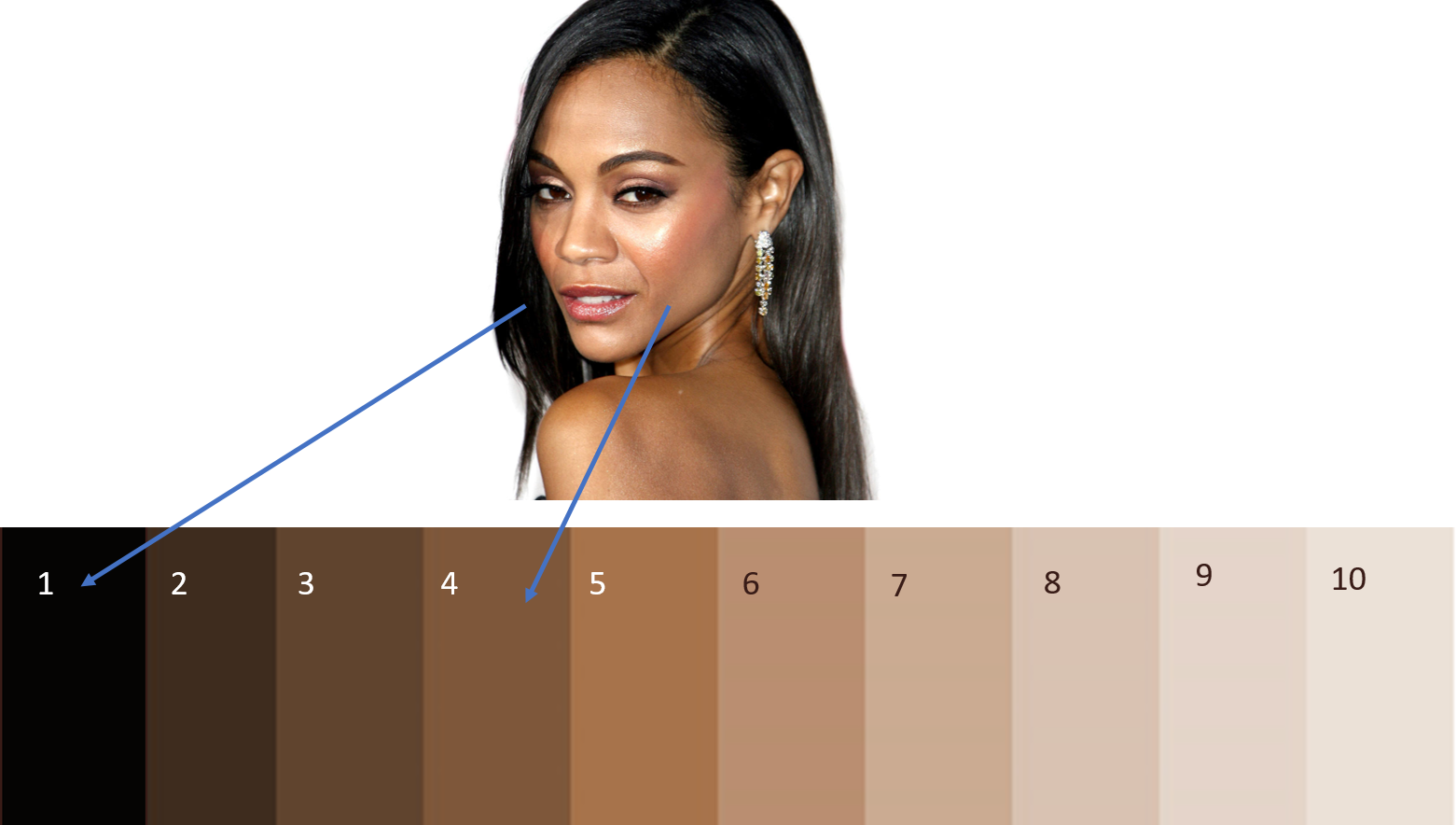 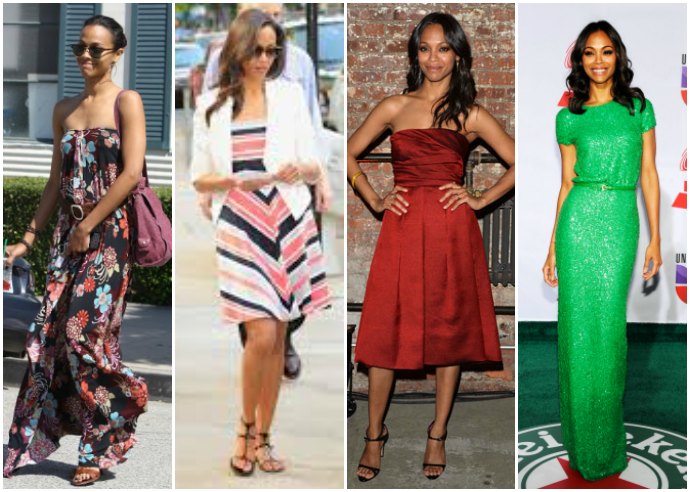 Zoe Saldana has a medium value – her skin is a touch darker than Oprah’s and so she looks good with some value contrast.  But, she’s better in wearing an overall dark outfit rather than a light one.

The dress on the left works as it’s overall dark and steps through to the light elements.  The 2nd from the left outfit is overall light with only touches of dark, so it doesn’t relate to her colouring.

The beautiful burnt red dress harmonises with Zoe’s warm colouring and her ability to wear a monochromatic outfit (2nd from the right), but when the colour becomes too light, even though monochromatic (far right) the colour wears her. 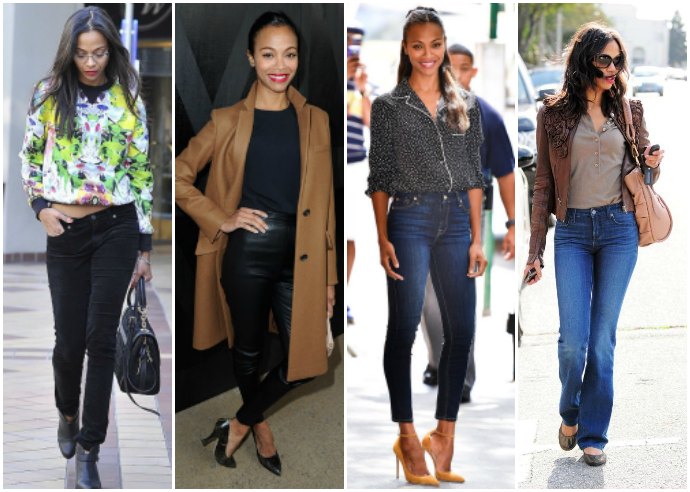 Too high a contrast (left) makes the sweatshirt the focus with the black jeans, though when she repeats her hair and skin colours with the camel jacket and black outfit she looks so much more stylish.

The black and white of the blouse is too high contrast for Zoe (2nd from right), but when she lowers the contrast down to medium with the lighter and darker shades of brown with her jeans (far right) the outfit sings. 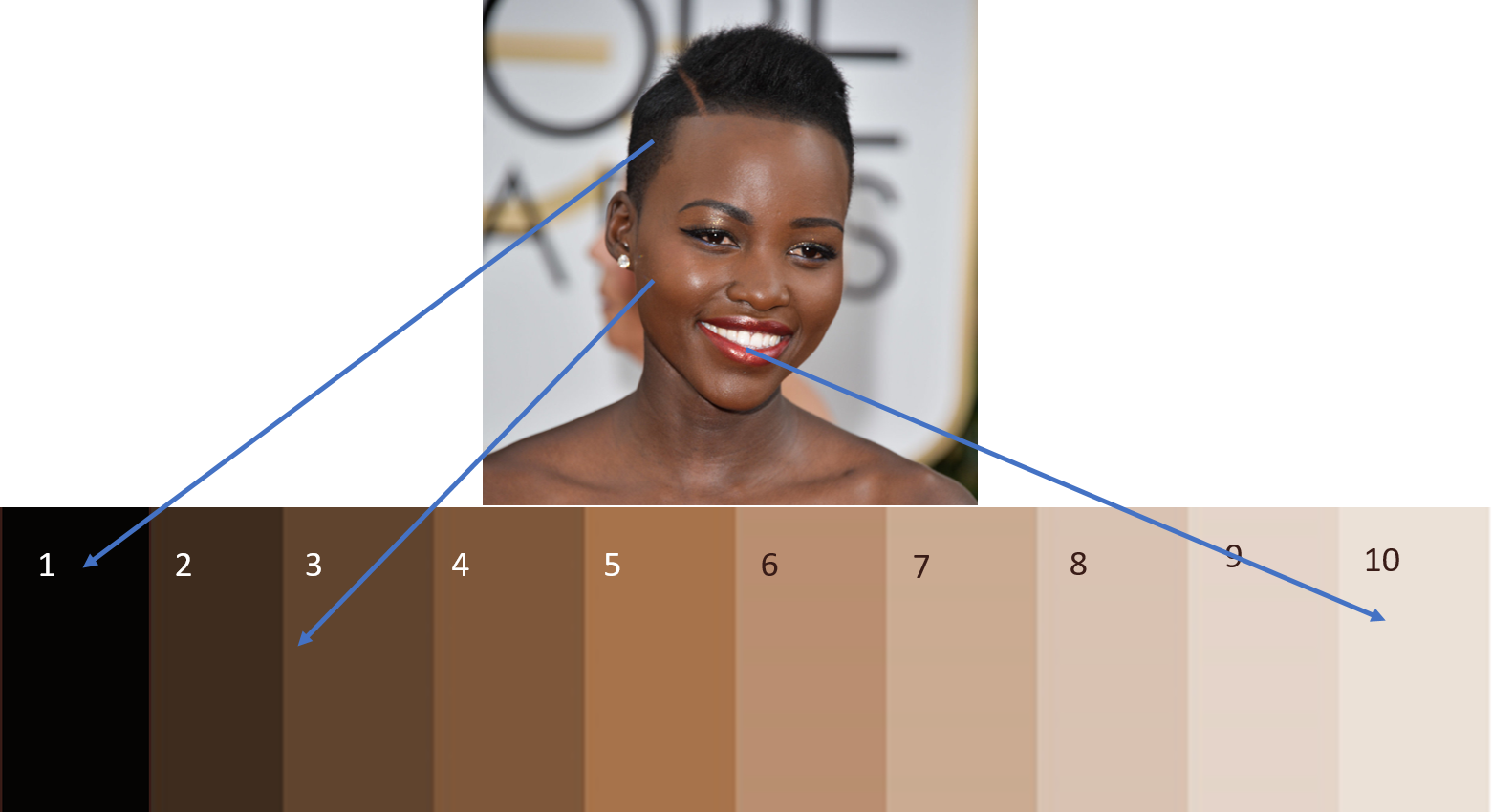 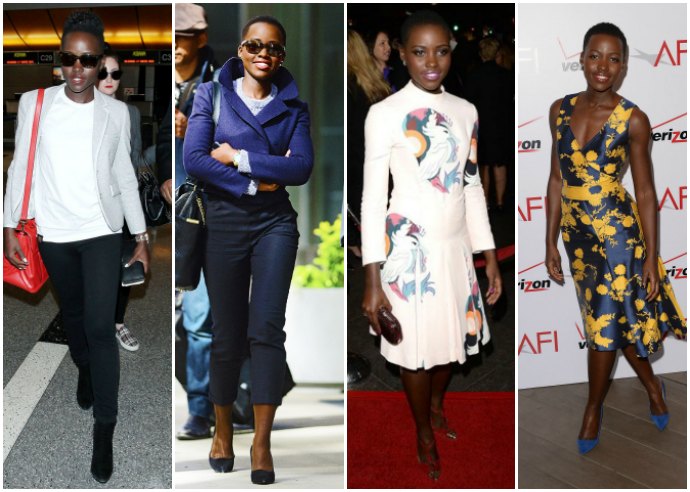 Again, like Viola Davis, though with an even deeper skin tone, Lupita Nyong’o has those beautiful white teeth that work with smaller pops of light in an overall darker outfit.

This is why the pic on the left where the light to dark ratio is closer to 50/50 doesn’t work well as there is nothing in her portrait area that replicates her dark value.  Unlike the 2nd from left outfit does work as it’s overall dark with just a pop of light and in a monochromatic scheme.

As Lupita’s value is overall dark, an overall light dress (such as the 2nd from right) wears her.  When she chooses and overall dark dress (far right) with pops of light in the pattern it’s a much better selection. 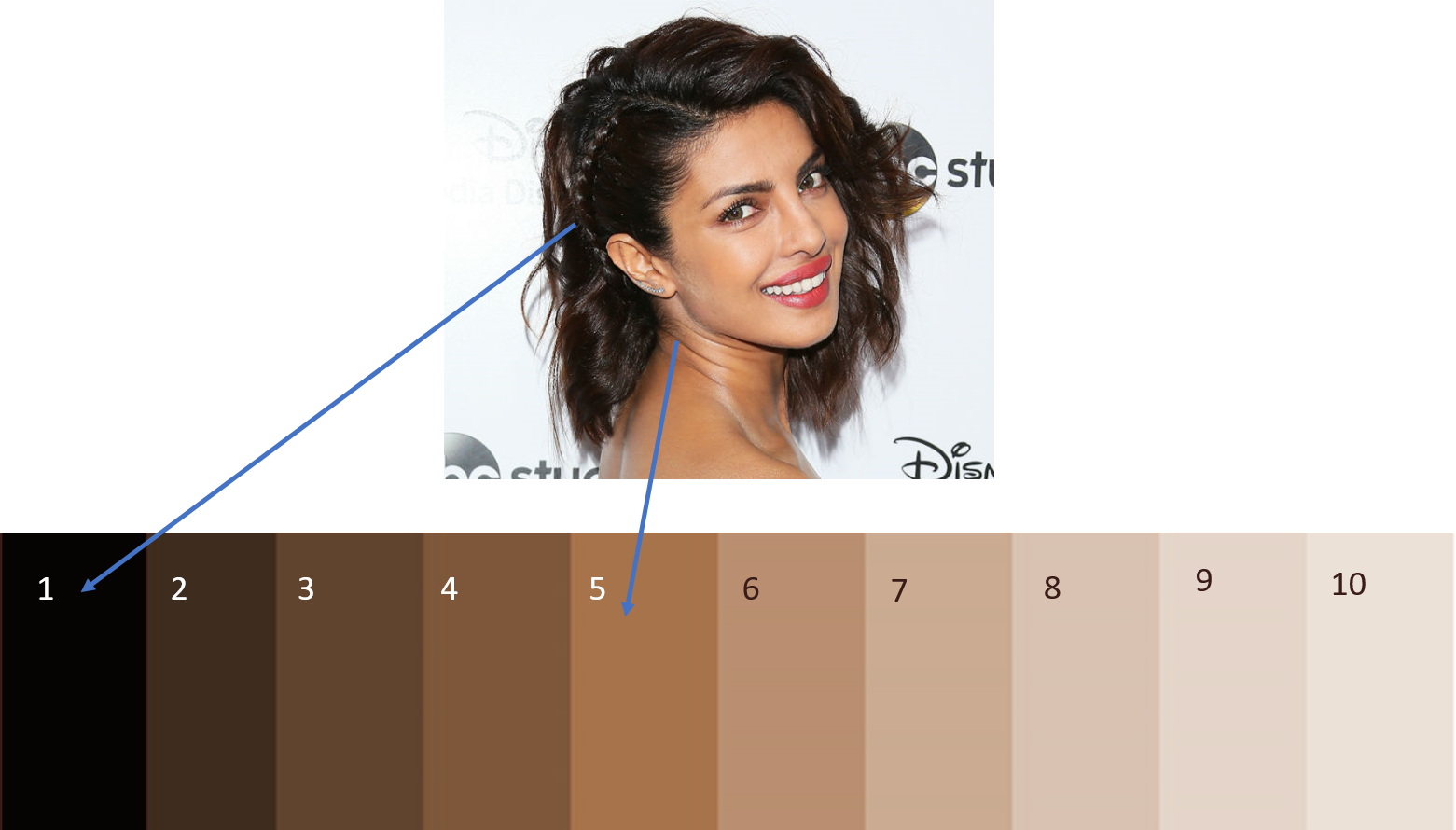 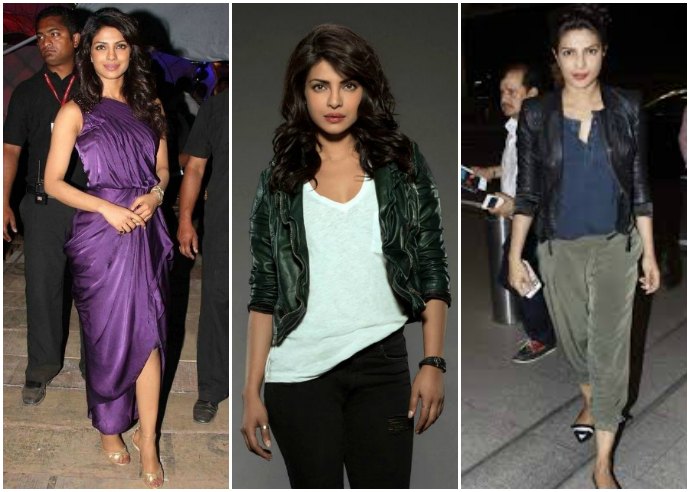 Priyanka Chopra, again has overall deep value and looks great in just one colour at a time when she’s wearing colour (such as in the purple dress left).

When she wears a high value contrast (middle pic) the white shirt becomes the focus of her outfit and dominates.  Instead when she wears a medium colour with her dark neutrals the outfit harmonises so much better with her colouring (though notice how her high contrast shoes become a focal point!).

If you’d like my professional opinion on your colouring, value and contrasts, then why not do my 7 Steps to Style program which includes this (plus so much more).

Got an Asian skin like Lucy Liu?  We’ll she’s very similar in colouring to the other high contrast Caucasian’s like Anne Hathaway – so have a look at these posts to get more tips on choosing the right contrast for you.

Getting Your Head Around Value and Contrast – the Celebrity Version

Where Celebrities Go Right and Wrong with Their Contrast