Flats, Heels, Bare Feet – what is really good for your feet? 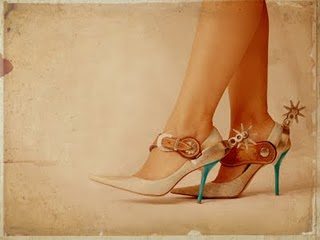 There have been comments on my post about flat shoes about the ‘health’ aspects of flat shoes, are they just as bad as heels? Should you have no heel, a small heel? What sort of other support do your feet really need?

I have to say, I’m of the opinion that we are made to walk in bare feet, if we’d needed some heel support, our body would have made more padding and lift on our heels naturally, so having a heel on a shoe is not good for our posture or the way we walk. In fact, we are not supposed to walk with the heel striking the ground first, but in fact for our foot to land more in the middle, which it apparently naturally does when not wearing shoes. Most people have shortened their Achilles tendon by wearing any sort of heel (even the quite low ones found in many of the supposedly better, more supportive shoes), so wearing completely flat shoes becomes uncomfortable as it stretches it out.

The only problem with not wearing shoes is the issues of cut feet, so we have to put something on them to protect them from the environment. Hard concrete and asphalt is not so fun to walk on with bare feet. From an article in The New York Magazine:

Last year, researchers at the University of the Witwatersrand in Johannesburg, South Africa, published a study titled “Shod Versus Unshod: The Emergence of Forefoot Pathology in Modern Humans?” in the podiatry journal The Foot. The study examined 180 modern humans from three different population groups (Sotho, Zulu, and European), comparing their feet to one another’s, as well as to the feet of 2,000-year-old skeletons. The researchers concluded that, prior to the invention of shoes, people had healthier feet. Among the modern subjects, the Zulu population, which often goes barefoot, had the healthiest feet while the Europeans—i.e., the habitual shoe-wearers—had the unhealthiest. One of the lead researchers, Dr. Bernhard Zipfel, when commenting on his findings, lamented that the American Podiatric Medical Association does not “actively encourage outdoor barefoot walking for healthy individuals. This flies in the face of the increasing scientific evidence, including our study, that most of the commercially available footwear is not good for the feet.” (read the rest of the article)

I have to say that even though I love my shoe collection, I find all shoes uncomfortable in some way, flat, heels of all heights and particularly anything with an ‘orthotic’ or arch support are the worst for me. I do a lot of barefoot walking, round my house, and outside my house and in the park on the grass. I’ve always walked barefoot where possible and my feet are probably the stronger for it as they are not reliant on padding. If you look at the pic above, you can see that shoes make us walk differently. Interestingly, after looking at this picture I got up and walked around my house, wearing very flat ballet flats, and noticed that I tend to walk more like the barefoot picture than the shoe picture example, probably as I spend so much time walking without shoes already.

The reality is, I will still wear shoes, I don’t really want to spend my time surrounded in the shops or restaurants by bare feet, and I’ll still wear my heels, but again, I wear them to walk from the car to somewhere where I know I’m going to sit down. But I’ll stop feeling middle-class guilt that my parents tried to instill (they never went without shoes) that somehow I was not proper running around the house and garden in my bare feet.

My chiropractor has always recommended walking round the house in bare feet, she thinks it’s better for both my feet and my spine than wearing shoes.

What do you think? Do you walk around without shoes on? Do you find it comfortable or uncomfortable?

I know that there are a lot of people who make a lot of money out of us selling us scientifically created shoes with lots of different padding features… but isn’t that what manufacturers do, create a problem and then sell us the solution?

What’s your opinion on this study and how we walk and whether or not shoe manufacturers are selling us support we don’t really need?