Are You Colour Contrast or Value Contrast Dominant 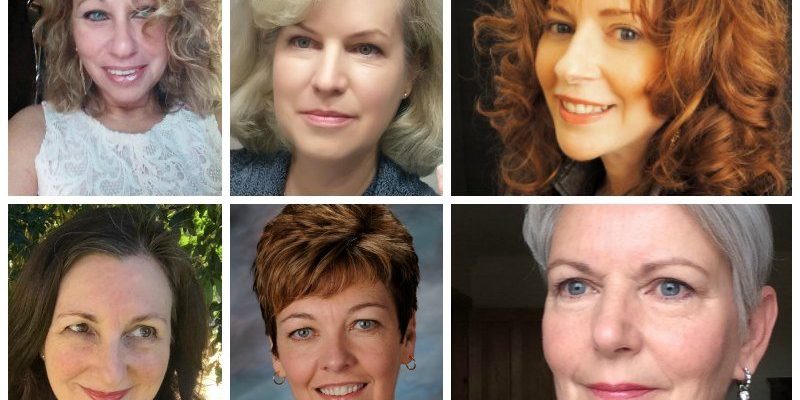 Contrast is a hot topic amongst my 7 Steps to Style and Evolve Your Style program members, because once you see its impact, you can’t go back to ignoring it. It’s an important part of any personal colour analysis – discovering how to wear your ideal colours (not just what they are).

Colour contrast = (how many colours you have naturally occuring in your colouring and how different they are from each other – read up about it here – and discover your colour contrast here) is a topic that comes up again and again with my 7 Steps to Style members as the more people see it, the more they realise its importance.

Value contrast = (the difference between light and dark in an outfit or garment and that difference in your own colouring – hair, eyes, skin) is what many think of when they say “contrast”, but it’s just one of the two kinds of contrast.

And recently there have been comments asking about how to define if you are colour or value contrast dominant, so I thought I’d answer that question here.

Firstly – what is dominance – well it’s what we see first. What we notice first about your colouring. For some it’s value, for some it’s colour and for some of us, neither are particularly dominant – in fact they are equal in importance. 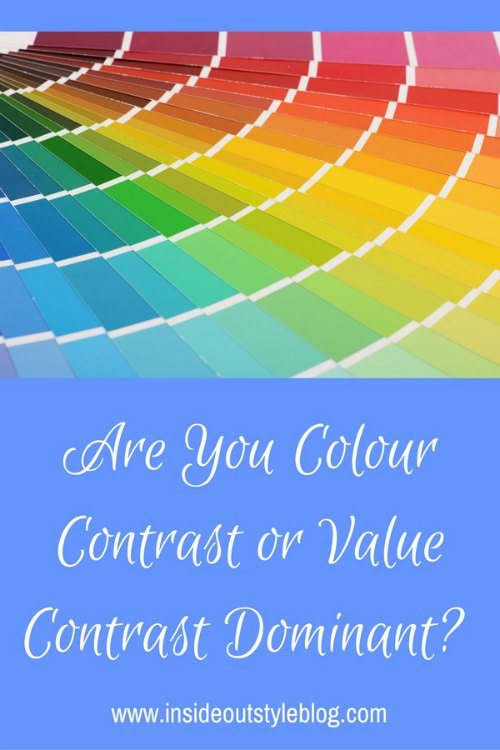 If someone is colour contrast dominant – the first thing you will notice about their colouring – well is colour! You will see colour in their features, from eye colour, to hair colour and even skin colour (a pinkish or golden skin can create an extra level of colour in features). 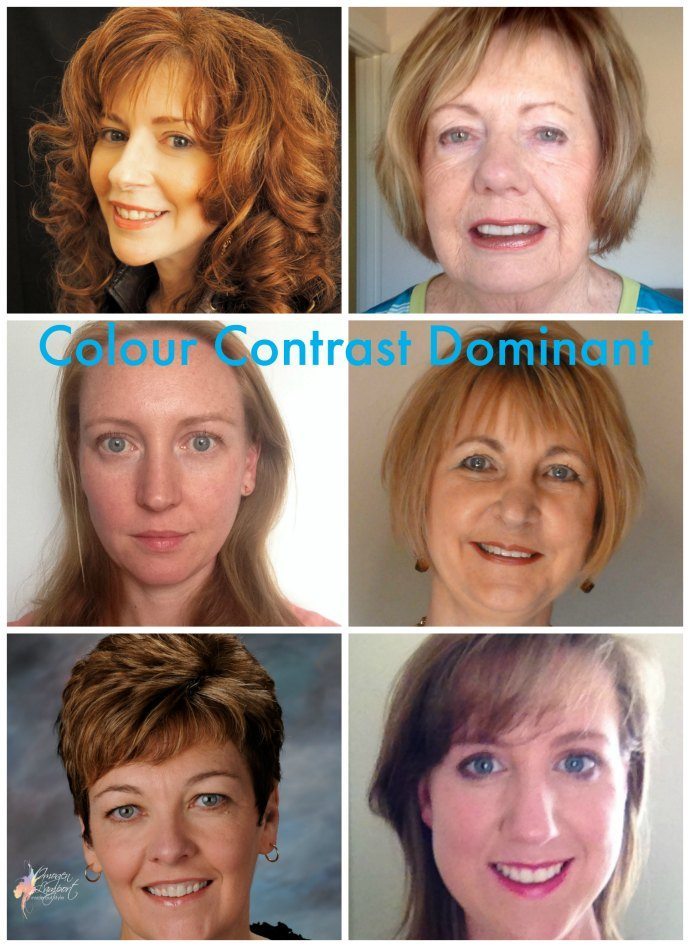 What to Wear – Colour Contrast Dominant

They will look their best when wearing colour – and often multiple colours that are in harmony with their own colouring. Avoid wearing just neutrals as it will look bland. High colour contrast works well with multiple colour patterns too.

If someone is value contrast dominant – the first thing you will notice about their colours is their value. They will most likely be high contrast (light and dark features) or they will be low contrast (very similar value) but they are less likely to be medium value contrast. You will generally notice the difference in value, or that they have very neutral colouring (rather than any sort of obvious skin, hair or eye colour) 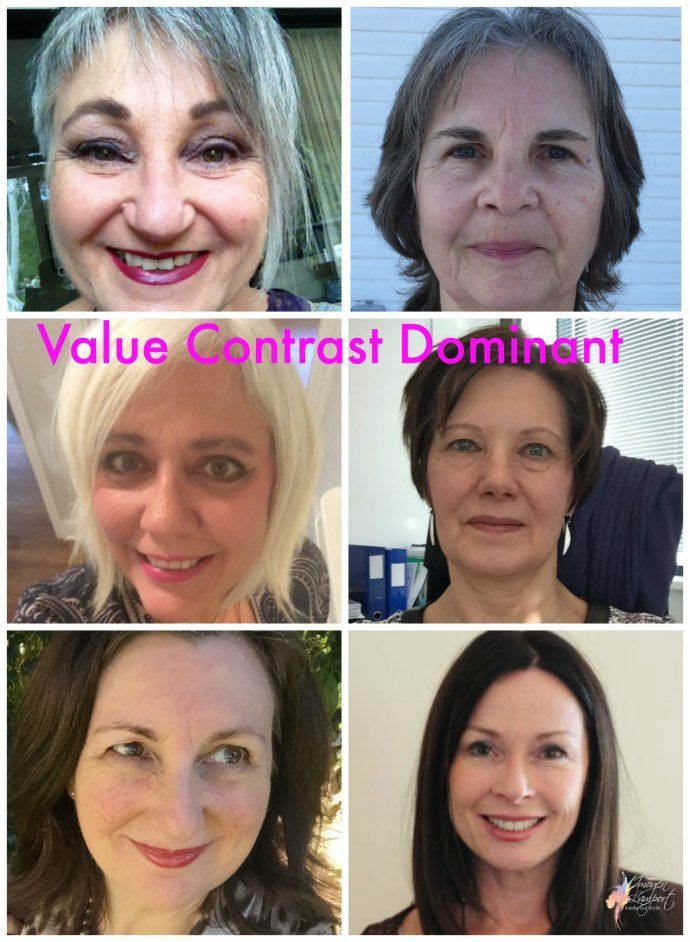 What to Wear Value Contrast Dominant

The value contrast dominant will look best when wearing the value that best harmonises with their own – either high contrast or low contrast. They ususally look better with fewer colours – more monochromatic outfits, rather than multiple colours at the same time. Avoid multiple colour outfits (unless you have a dramatic or creative personality).

Then there are those who sit in the middle between the two. With one coloured featured and the remaining two more neutral,and most frequently a medium value (though not always). 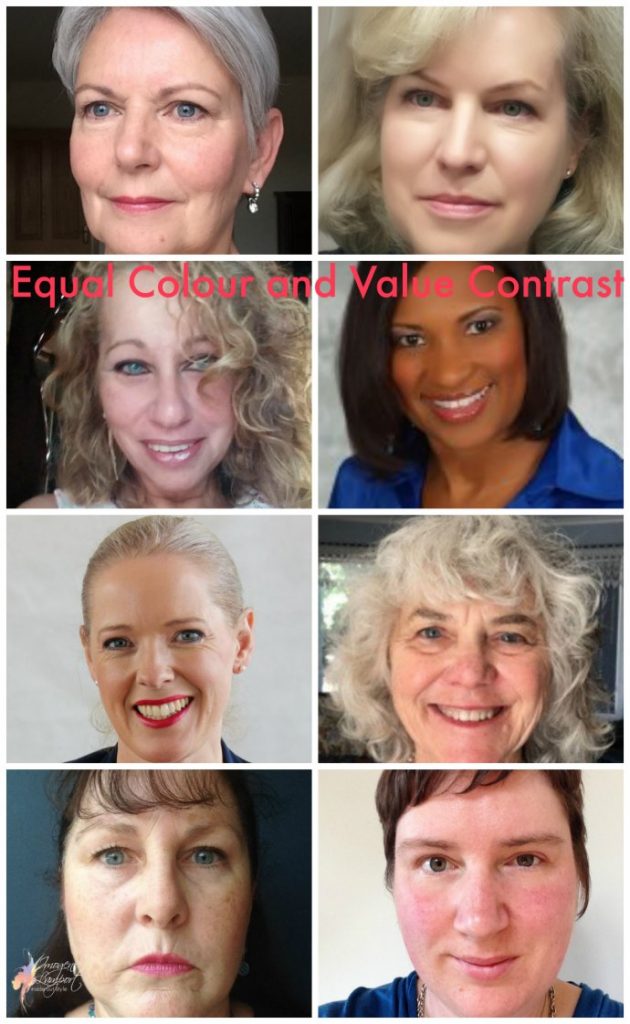 What to Wear Equal Colour and Value Contrast

They need some colour, but also only a medium or medium low value contrast to look their best unless they are an obviously coloured skin (such as bottom left) but still high value contrast. They can look dull in a complete monochromatic outfit. They are ideal in neutral plus a colour (or two colours, but not lots of colours at the same time).

Remember, no matter your natural contrast levels, that personality may trump guidelines.

The Impact of a Summer Tan, Choosing the Best Colour for Your Shoes, and Selecting the Most Flattering Column of Colour
May 31, 2022

What are the Crossover Colours in Every Colour Palette?
May 19, 2022

Are Dark Colours and Black the Only Colours to Wear to Look Slimmer?
April 12, 2022

The Key To Wearing Medium Value Colours When You Have High Value Contrast
March 8, 2022