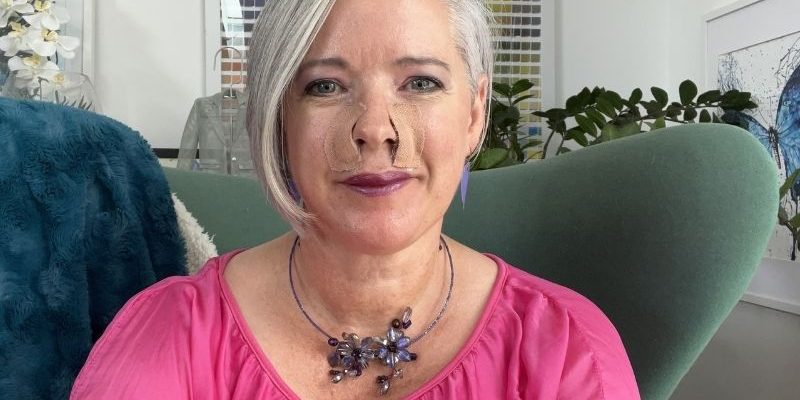 I’m riffling through photos from the early noughties decade 2000 – 2009 to see if I can find evidence of when the skin cancer lumps appeared next to my nose. Doing this is fun as I get to see my kids as babies, toddlers, and their cheeky little kid smiles again.

I mean, how’s this for cuteness? 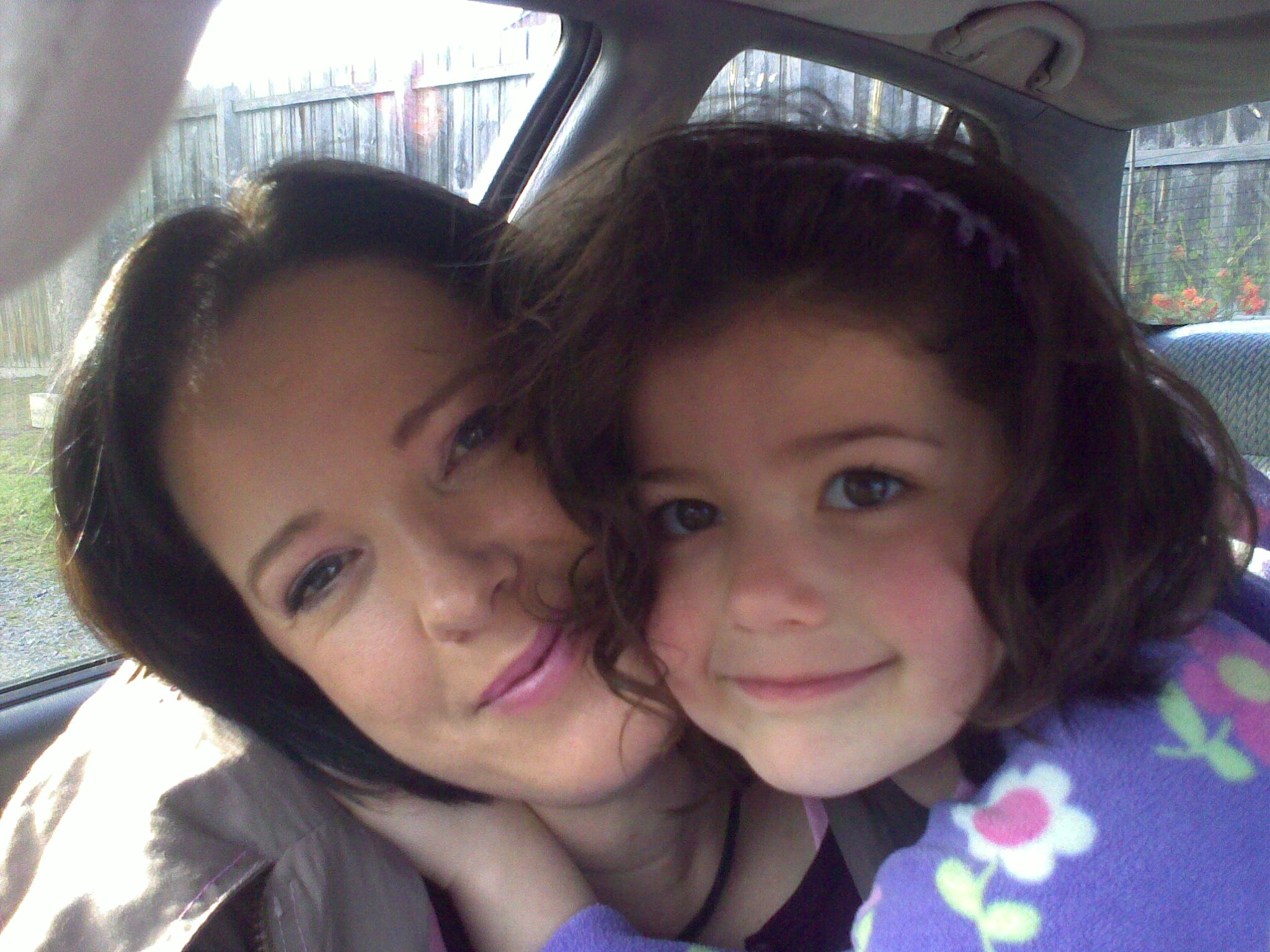 I’m searching for signs of tiny growths on the sides of my nose. Nothing in 2006 in my first set of professional photos that have enough definition to be able to make anything like this out, but in 2009 I think I can glimpse a little something appearing that is definitely more apparent by 2010. 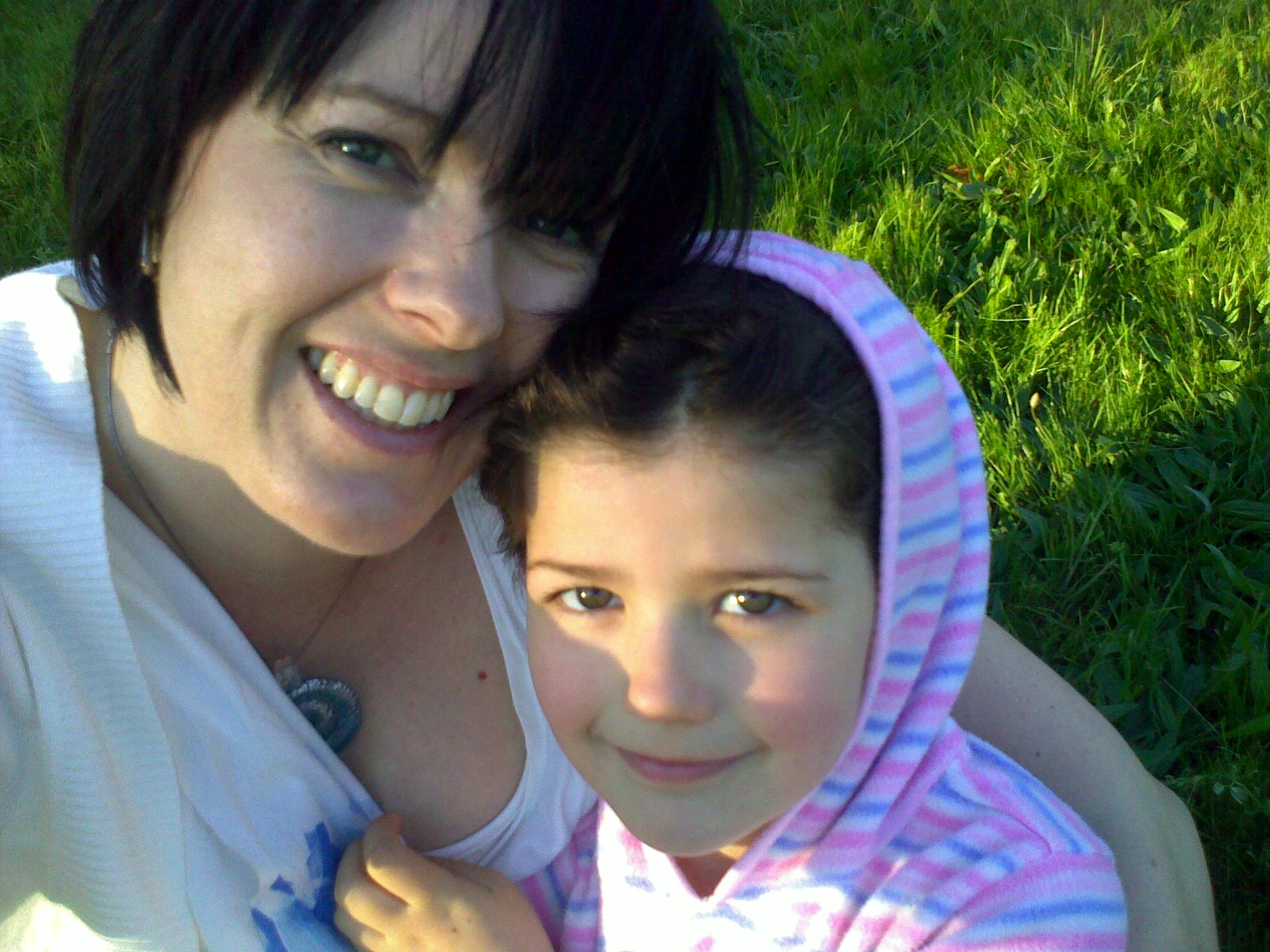 You can just start to see a tiny dot on the side of my nose in the nasolabial fold). That red dot on my chest is a cherry angioma.

It doesn’t really surprise me that 2009 was the year I started growing these Basal Cell Carcinomas. It was a very stressful year that included:

Given my, I’m sure, very high cortisol levels during 2009 and 2010 it really is no surprise that some cells decided to go rogue and mutate into these BCCs.

Now I thought when these lumps first appeared that they would go away, but they didn’t. Every now and again I’d accidentally take the top off one with too vigorous drying of my face after a shower and it would weep a clear fluid and a little blood (turns out that skin cancers can spontaneously bleed because skin cancer leaves the skin more fragile than healthy skin cells – so if you find yourself bleeding from the same spot then get it checked out). But when it healed up it was still there. But they didn’t get larger so I stopped thinking about them.

During these years money was super tight too. So going to see a specialist doctor wasn’t high on my list of things I had the spare cash to do. Plus, aren’t the skin nasties always coloured? That’s what I’d been led to believe when I’d seen photos of skin cancers. These little lumps had no black, red, brown or anything other than skin colour to them.

Down the Google Rabbit Hole

At some stage of the twenty-teens, I did decide to consult Dr Google to see if I could figure out what the various little lumps that had started appearing in various places across my body were. The little red mole on my chest I discovered was a cherry angioma and totally benign. The lump next to my right ankle, a dermatofibroma, most likely occurred from either a scratched mosquito bite or a leg-shaving injury. Also totally a non-issue.  Dr Google gave me nothing useful when I looked up “clear lump”.

When I searched up skin cancer images on google, they tended to show much more colourful unpleasant looking lumps so I took Dr Google’s word for it and didn’t think much more about it. So much of the information about skin cancers talks about colour and changing colours in moles. So a skin coloured lump just didn’t seem to fit the “you should be concerned about that and get it checked” category.

Finally in 2021 when I’d taken the top off one of these lumps again and it hadn’t healed up and disappeared, and I was at the GP for a general checkup after not having been to the doctor in a couple of years,  I mention these lumps. My GP looked at it and said, “they’re probably not anything much but I’ll refer you to a dermatologist” and so then I got my referral and of course, Melbourne went back into lockdown and it was months before I finally got to see the dermatologist. I have a tendency not to want to bother people or make a fuss when really none is required, but she did say “why not have a full skin check while you’re there” and so I felt like it was a legitimate reason to go to see the specialist, not just one for the sake of my vanity.

The minute the specialist (dermatologist) saw these little lumps on the sides of my nose he knew, before he biopsied, that they were BCCs and told me that I should have them removed, and I shouldn’t wait more than a couple of months to get it done and he immediately referred me to the plastic surgeon.

So Valentine’s day 2022 and I went to day-surgery, and under twilight sedation I had all my annoying lumps removed (including the cherry angioma on my chest and the dermatofibroma on my right ankle, I mean, when you’re already on the table and have the plastic surgeon right there with the scalpel I figured I may as well get rid of the unsightly coloured lumps as well).

Given that I hadn’t known what to Google, the way I described my lump in Google didn’t get me the information I really needed, which meant I’d ignored cancers growing into my face for 12 years. That’s some kind of stupid that I have to own up to. I mean, I’m not a doctor and Google isn’t one either, so why trust the information I’ve found on the web to be correct without actually corroborating that with someone who has spent 15 plus years studying this specialist area of medicine and actually knows some stuff?

One fun side effect of the removal of the BCCs is that my top lip has now swelled up to twice its normal size, (because they had to take out tissue from the nose, skin and lip areas to remove the tumours), which means I’m getting to experience what I’d look like with lip filler (not keen on it -check me out in the video above).  I’m sure it’ll go down again in the next few days (here’s hoping).

I have to keep the area completely dry for 10 days – this is hard  – I’m now struggling with how to wash my face without damaging the dressing? How to wash my hair without getting my face or the bandages wet (the answer is in a very shallow bath with help from my husband or go to the hairdresser).  If you’re going in for surgery – don’t be like me, wash your hair before you get it done!  I can’t shower for 10 days as I have to keep all my surgical sites completely dry.

I’m now waiting to find out if it’s all been removed and to see my new wider nose (yes apparently he had to pull the sides of my nostrils out to fill in the gap where the tissue he removed used to be).  I’ll find this out in a week’s time when I go back to the plastic surgeon for my follow up visit.

Don’t Be Like Me and Wait 13 Years – BCC Removal

If I hadn’t waited so long, the amount of tissue removed would have been smaller (BCCs generally grow inwards and not as much on the outside). Even though BCCs rarely spread to other parts of the body, they can grow into nearby areas and invade the bone or other tissues beneath the skin (euugh).

Got a lump? Go to the doctor, get a referral to a dermatologist and get it checked. In fact, get them to do a full check of all the skin on your body because it could be the thing you don’t realise (you can’t see it as it’s in your hair or between your toes or on your ear) you have, or just something you’ve assumed was nothing important, that is in fact, something that needs to be removed.

Specialists are the experts, they have the years of training, the education and experience to give you the best advice.  I think this is a life lesson that can be applied to every area of life, not just the medical ones!

BCCs are mostly found on the nose (me and Huge Jackman too), ears, face and head – because these are places that are most exposed to the sun.

I’ve been a daily sunscreen wearer since I was 18 and discovered that most wrinkles come from sun damage (just check out the top of your inner thighs and compare that skin to the skin on your forearms to see the difference).  I mean, at 18 I wasn’t thinking about skin cancer but I didn’t want to get wrinkly too young!  This is great, because I may have developed something worse if I hadn’t been wearing it.  But I did grow up in the sun-loving 70s when sunscreen wasn’t really a thing (no the thing was to wear some suntan lotion to help you tan more (tan = skin damage) and SPFs only went up to 15 which under the Australian sun for someone like me meant 150 minutes of protection (and we’d spend the whole day at the pool or beach … so not really enough).  My parents were early adopters of sunscreen, but still in those days they mostly only blocked UVB rays and it was not until the late 1980s when UVA blocking was also introduced after scientists find that it’s just as important to block to stop skin cancers from growing.

So I Got My Skin Checked and This Happened