Understanding Where You Sit on the Fashion Continuum

What is the Fashion Trend Continuum?

As with all products, and fashion is a product, there is a continuum, a growth and decline cycle. With fashion though, it can be fast (fad) which lasts 3-12 months or slow (classic) which last 5-10 years, though many fashions turn into that mid-point(trend), that last around 2-5 years.

When considering where you are you can consider which group you identify most with on the fashion trend continuum:

I would think that most likely, the Innovators, Early Adopters and Early Majority are more likely to be people who like “options” (like variety) vs the Late Majority and Laggards may more likely be “procedures” (that is smaller wardrobe people) as they have less of a need for change or new (find out about options vs procedures here to discover which you are). I’d love to know your thoughts on whether or not you think I’m right or wrong – please leave me a comment about this below.

Where are You on the Fashion Trend Continuum?

Thinking about the Fashion Trend Continuum, Jill Chivers of Shop Your Wardrobe and I discuss in this video:

Discussions about fashion fads and trends always remind me of this scene in the movie The Devil Wears Prada, which I think is a great reminder of how nobody (except a hermit) is exempt from being influenced in some way by fashion trends.

I’d love to know where you see yourself fitting into this fashion continuum?

Do you feel the need to replace much of your wardrobe each season or are you happy wearing the same things for years?

Do you like to change the way you wear your old favourites each year or do you keep wearing them the same way year-in year-out?

I know for me, I’m not an Innovator, I sit between early adopter and early majority, I usually to see new silhouettes around for a short while before I want to try them out, though sometimes I like to try something very different or what I see as a fun fad that tickles my fancy, when I do want to add something new, but I do keep much of my wardrobe for years and years. Rather than replacing it all, I prefer to add a little of something new, and then find a new way to wear what I already own, which makes me feel like I’m wearing something new, without it actually all being the latest fashion.

Where do you sit and why? 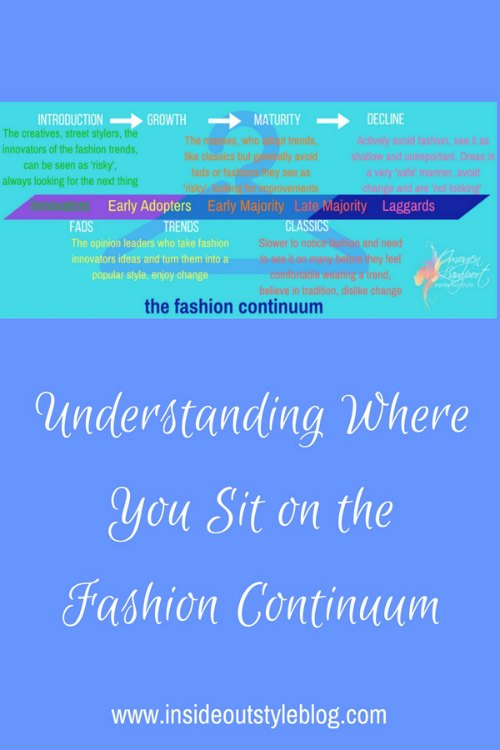 Shopping for Ankle Boots for Autumn or Winter?
November 11, 2022