Why I Decided to Have Bunion Surgery 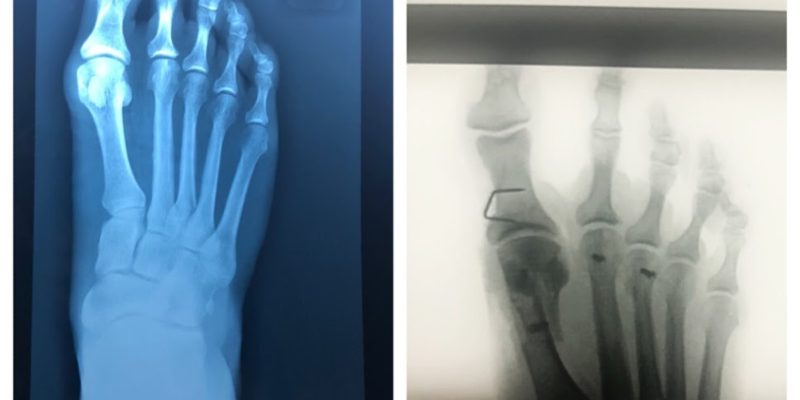 My life as an image consultant and style blogger is all glamour. Absolutely, I’m sure that’s what you think. The reality, not so. Really it’s lot of time spent thinking and writing about style and colour topics and seeing clients and helping them sort out their wardrobes.

Now I’ve always loved a fabulous pair of shoes, but over the past 6 years, wearing fabulous shoes has been getting harder and harder. So much so, that I’ve just gone under the knife for bunion surgery on my right foot.

How did it get to this point you may ask? Well, you may not be, but I have been, and I see the start of my foot issues back in 2012 during my trip to Hawaii for the AICI Conference.

It was my first experience of walking around (not in bizarre shoes, just regular sandals for about an hour) and ending up with blisters on the balls of my feet. It was the first sign that my bunions were more than just a little unsightly, but they were impacting on how my foot behaved, and no longer was the pressure being evenly distributed by the bones under my big toe, little toe and heel, as it should be, instead, the pressure was being taken in every step by my 2nd, 3rd and 4th toes, which are the smaller boned and weaker ones.

Fast forward to 2014 when I started running and was happily pounding the pavements 3-4 times a week for a 5km run. This then started to aggravate an old ballet injury from my teen years (one that I had forgotten about) to the point that after 2 years of running I started getting lots of pain in the joint of my 2nd toe, the toe I had injured doing a jete and landing poorly, all those years ago.

My doctor just told me to rest up and not run for a few months, I did this, but a few months turned into a year and more, and still, the pain was there when I wanted to walk (not even run). Most of the time I tried to ignore it but eventually, I returned to my doctor and he referred me to an orthopaedic surgeon.

After x-rays and a consultation, he noted that I had inflammation of the 2nd toe joint, as well as my bunion, and we tried the orthotic route. These orthotics did reduce my level of pain somewhat and did stop the balls of my feet blistering, but I was still getting blisters on my 4th toe when walking less than half of the recommended 10 000 daily steps and that dastardly 2nd toe pain was still there.

Spending time in the UK summer, and it was a hot one, also made me realise that orthotics are all fine and good in winter shoes and boots, but just are not great for a hot Melbourne summer where the temperature is regularly over 30C and open shoes are the only way to travel. Summer doesn’t last a few weeks, but a few months. Plus they hadn’t actually fixed my feet in the way we had hoped.

After chatting with a friend who had had her bunions removed, I decided to take the plunge and go for the bunion surgery, no guarantees that it would fix my issues, but I figure I’ve got a large shoe collection and a lot of years left to wear them all and the chance of reducing my pain was very good.

So here I lie, with my foot up above my heart on a stack of cushions for the next 2 weeks waiting for the bones to heal and the swelling to ease, wearing a beautiful moon shoe!

I found this video to give you an idea of what they may do in a bunion surgery operation.


The surgeon found that my 2nd toe had arthritis, caused from that impact injury all those years ago, then exacerbated by the running. He has cleaned out the joint so we hope that this will improve my walking situation markedly. Now with pins in 3 toes and some tendons that have been snipped as there were pulling my toes under too far, I am awaiting the results to see just how successful this surgery has been. 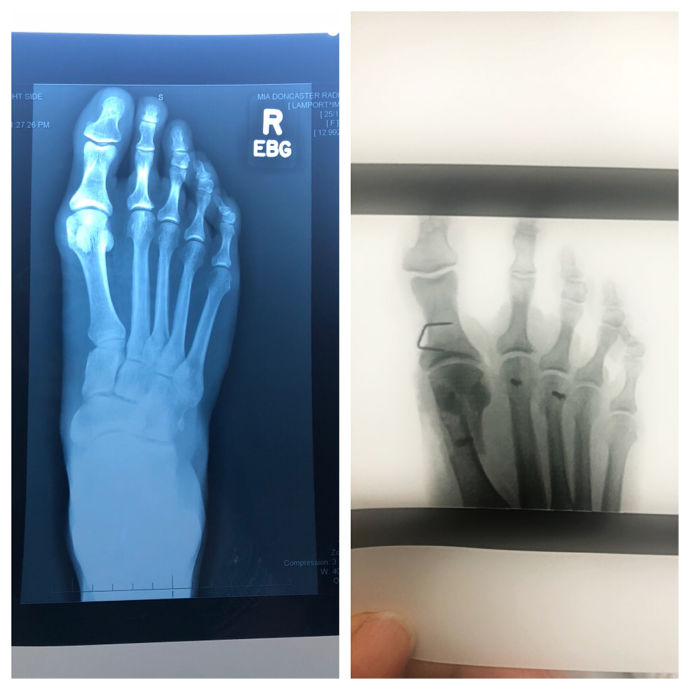 Before and after – dark dots on the image on the right are the screws and staples now permanently embedded in the bones of my foot. 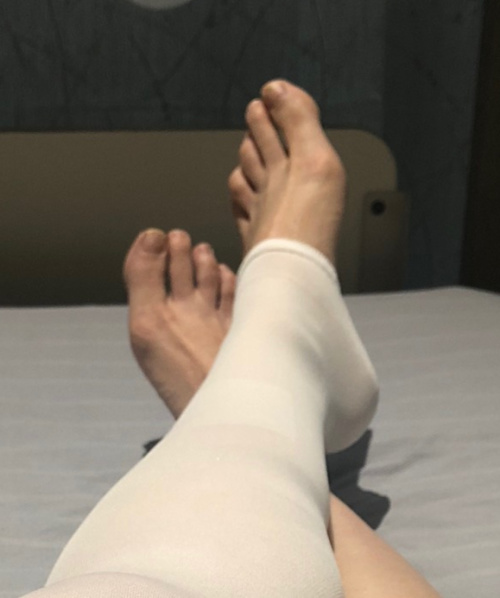 This is my before shot – the foot I’m having the surgery on is my right foot – the one without the glamorous surgical stocking.

So I’m 5 days postoperative. My foot and leg have been quite swollen, but that is starting to ease, I can no put a couple of fingers between the bandage and my leg. 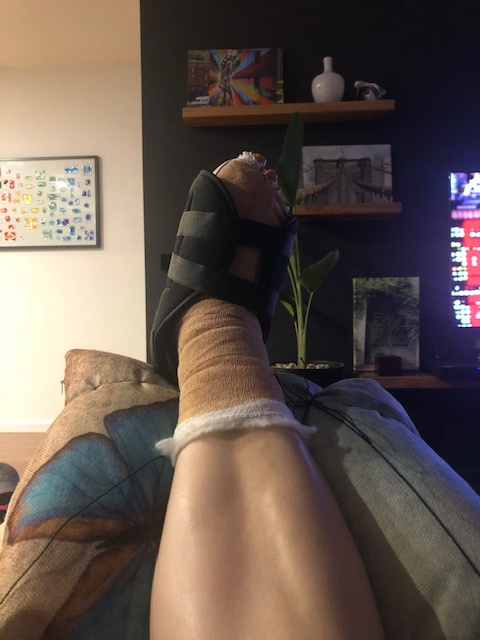 I’ve been told to walk as little as possible for the first couple of weeks and keep my foot above my heart, this helps reduce the swelling and to let the bones heal as fast as possible. So I’m assuming this position either in bed or on the couch (not sitting at my desk in front of my computer), under doctors orders. In fact, my doctor’s orders were to spend 2 weeks watching Netflix (please give me your recommendations!).

I’m using crutches to get around most of the time, though today I’ve not needed them as much as it’s the throbbing, swelling of my foot that causes much of the pain when standing, more than the bones, and as the swelling is reducing so is the pain. It won’t be long before I’m ready for a walking stick instead of the crutches.

I’ve been taking serious painkillers (you know the addictive narcotic kind) for the past few days, but not today, now just on the paracetamol.

As it’s my right foot, I can’t drive for 6 weeks (the time that it takes the bones to heal) which makes life a little hard, and I’ll be in this glam shoe for this time too (sleeping in it as well), then moving onto soft sneaker shoes for the next few months, so I’ve been told.

I’ll be taking a break from working and blogging (blogging is work) as I’m finding that I need to sleep a lot too, most days I’ve been having 3-4 hours of naps as well as my overnight sleep.

I figure that I work hard most of the time (my daughter has noted recently that I tend to work 10 hours days most days of the week, and I do that just to try and stay on top of emails and blog posts and the like), so a few weeks of enforced rest is not a bad thing to take to let my foot heal as best it can.

Have you had bunion surgery?How was it for you?