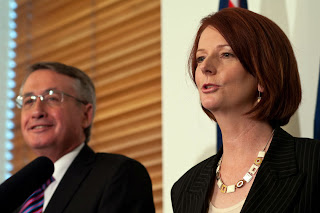 This week something happened that I hoped might happened, I just didn’t expect it in my lifetime, we got our first woman Prime Minister, Julia Gillard.

It’s interesting to have watched her image change over the past few years. Women in politics are often criticised for their appearance (men are too, but not so viciously), and I’ve wanted to help Julia improve her image for years so that it would be less of an issue for her (though have never been allowed close enough to do so). Now she’ll be scrutinized even more closely and will have to be very careful about what she chooses.

She was obviously given a makeover for the announcement (pic above) on Thursday, the new look is much more smooth and sophisticated than it has been in the past. 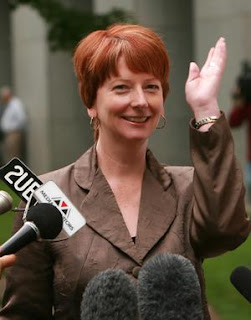 Here is Julia when she first came to power as deputy PM in 2007. This suit doesn’t have the power of the one in the top picture. The curved lapels, floral embossed fabric and lighter colour make it a less powerful suit than the dark pinstripe. 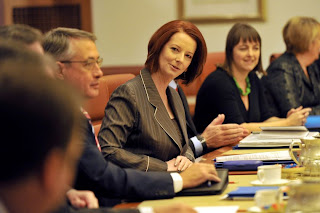 Here she is again, day 2 of her new job, the suit is better than the 2007 version, but the lapels are all wrong. Why you may ask?

The lapels are too low (and drag your eye downwards, away from her face), the scale is also too large, her facial features are quite petite and the wide lapels make the whole jacket look a little too big for her.

The other feature I’d change on her jackets is to make sure they all have more angular lapels, preferably peaked, which would draw attention up to her face, and match her facial features (which are all angular). We look best when the features of our clothing are reminiscent of our eyes, nose, mouth, chin and cheekbones. Curved lapels draw attention to her sharper features, we notice the difference.

I would suggest that she look to wear Australian designed and made clothes, supporting the local economy and ensure all her clothes fit her perfectly.

Julia (or your peeps), give me a call and I’d love to help you create your best image.