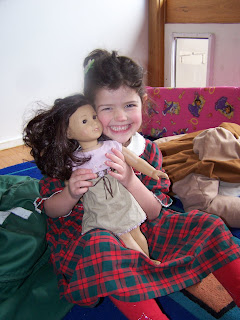 This morning my lovely daughter Niamh (4) decided she wanted to wear my great grandmother’s beautiful smocked baby dress (which a: she wouldn’t fit into, and b: is over 100 years old so would perish, so I don’t want her to wear it). So when I said no to that dress, she decided to put on this dress, which was mine (and a handme down, though my favourite and best piece of clothing that I owned for some years).
Today, a large box arrived in the mail from Karen, Of a Certain Age, whose daughter played with Niamh when we were in the US in May, and decided that she’d like to send Niamh one of her dolls.
Niamh was very excited to open the box, and insisted I take photos of her with her new doll (top photo), and I found this photo of me wearing the same dress taken Christmas 1974 (in Ulverstone Tasmania at my grandmothers house, bottom photo) having just opened a present with a new doll in it for me. 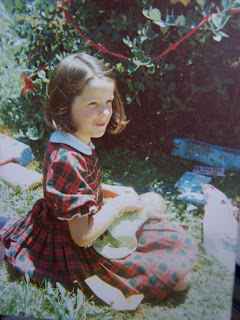 It’s very tempting to keep lots of stuff from when your kids were young, I have kept 1 outfit each from the very early baby days, plus their first pair of shoes. I’m glad my mother kept this dress, but I wouldn’t want more as there is only so much ‘stuff’ I want to keep.

Do you keep your kids clothes or have you been given clothing from when you were a child?

Your Colour and Style Questions Answered on Video: 96
November 25, 2022