Yesterday, after a 15 hours plane journey, my family and I arrived in LA.  My kids, who are Miss 3 (about to turn 4, and as far as she’s concerned, the reason why we’re even here is so she can celebrate her 4th birthday at Disneyland), and Master 7 coped with the flight surprisingly well.

Upon arrival and after spending another hour in a line (I’ve been told not to call it a queue) to be fingerprinted to make sure we’re not international style terrorists, we were greeted at LAX by the lovely Deja Pseu and Karen of a Certain Age, both who were sporting a spot or two of leopard (sorry, excuse the pun) in their own inimitable styles.
Karen, incredibly kindly, had offered to meet us and drive us to our accommodation, but to get to meet 2 bloggers who were willing to come to the airport at 8am – what a fantastic way to be welcomed to America!
After spending a few hours getting some brunch and then picking up some cell phones (not mobiles) to use while here, we headed home for a nap.   Feeling woozy with jetlag, I was first to hit the hay (I think I only managed about 1 hours sleep on the plane, upright in cattle class) and was out like a light.  A couple of hours later I woked to the sound of giggling and laughter.
And here is want I found, my beautiful daughter had decided to draw all over her face and arms with  felt tip pen (texta).  After some scrubbing with a face cloth (washer), you can see the remnants (the bits on her eyelid are rather hard to get off) on her eyelid, cheeks and chin. 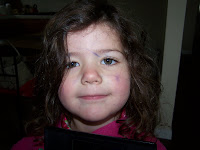 I just hope that we can eradicate the rest in the next couple of days before we’re joined by her grandparents (my In Laws) who are flying over from the UK to join us for our holiday.
Next Saturday is our LA Workshop – we could probably squeeze in a couple of extras if anyone is interested – email me at Imogen dot Lamport at gmail dot com, and I’ll get to meet more wonderful LA bloggers then!
Today we’re off to get acquainted with our local area (we’re staying not far from Disneyland).

The Secret to My Success as an Image Consultant
June 14, 2019

A Week in the Life of this Personal Stylist and Style Blogger
October 3, 2016